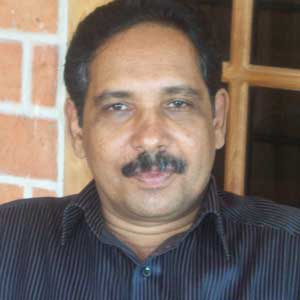 Alankode Leelakrishnan is a poet and writer from Kerala. He is the State President of Yuva Kalasahithi, a cultural organisation affiliated to Kerala state CPI.
Leelakrishnan had written poems and articles during his school years. He first came to the public stage as a storyteller.

Leelakrishnan’s cultural study book “Through the Shores of Nila” published in 1993, has since been made into a documentary series by Doordarshan. He is an independent journalist and also writes poems and articles in periodicals. He has written stories, screenplays and songs for a few Malayalam films including,Thilakkam and Eakantham.

Leelakrishnan is one of the judges of the poetic singing reality show “Mango”, which is being broadcast on Kairali People TV.